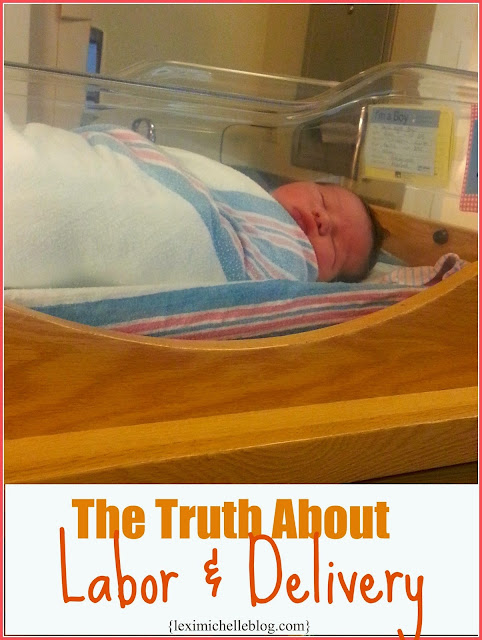 When I was pregnant, I really wanted to be as prepared as possible for giving birth. I spent hours & hours researching but was never satisfied with the information on the web. I felt like there was hardly anything at all that explained what labor & delivery actually felt like! So that is what I am hoping to explain to you today. Here is my experience with labor & delivery:

Sometimes due dates are really accurate.

My due date was July 6th. David is my first & everyone told me to expect him to arrive late. My little boy was right on time. I literally started feeling contractions the minute the clock struck 12 on July 6th!
My husband & I were nervous and also extremely excited to meet this little man–maybe even a little too excited because we rushed to the hospital right away.

Everything I read online told me to wait until my contractions were less than 5 minutes apart so I used a contraction timer app to keep track of them.
My contractions were actually very sporadic. Sometimes they were 15 minutes apart & other times they were 3. So to be on the safe side, we went to the hospital a few hours later. The nurse checked to see how dilated I was (2 cm) & monitored my contractions for about an hour & then sent us home saying we were only in the early stages of labor (which can last up to 24 hours) and told us to return after my water broke.

Contractions don’t hurt a ton in the beginning.

For those of you wondering. These contractions didn’t hurt. They were noticeable, just kind of like my stomach hurt a little.  Some describe it as the way menstrual cramps feel. I’m one of the lucky few who have never really experienced cramps so, as gross as it sounds, for me I would probably describe it as that sick-to-your-stomach feeling you get when you really need to go to the bathroom, but then it goes away after about a minute & you’re fine lol. 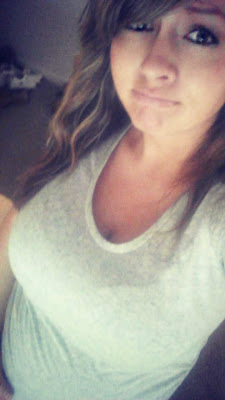 (a “selfie” I took during “early labor” while I was having contractions lol, also it’s hard to tell but I’m wearing tan shorts lol)

The next afternoon (still July 6th) my water still had not broken but the contractions got stronger. I have a pretty high tolerance for pain, but these hurt so bad, I wanted to cry!
My husband said we should wait until my water broke like the nurse had said because it would suck to get turned away again, so we waited. After about an hour I told my husband I didn’t want to wait anymore & we left (around 7pm on the 6th).
When we arrived at the hospital they almost turned us away AGAIN because I wasn’t technically in “active labor” (which is 4 cm dilated, I was still only 2cm) & my water had not broken, but thank goodness we had an amazing nurse who could see I was in pain & let us stay!

I was given an epidural at around 11pm which allowed me to sleep. When I was pregnant, I heard horror stories of how huge the needle was for the epidural & that you could get paralyzed, etc, etc, But let me tell you, it is not scary at all! First of all, they use a tiny needle to numb the area & then they give you the epidural so you really don’t feel it at all.

With the epidural, labor is a breeze.

The pain went away and I fell right asleep once I got the epidural. Granted, I was woken up every couple hours to get “checked on,” but still.

A catheter is involved.

If you get an epidural, then they need to insert a catheter. The nurse said it is because you are numb, so you wouldn’t feel the urge to go to the bathroom even if you needed to. Good news is you already have the epidural in place, so you don’t feel the catheter being inserted at all.

If your water doesn’t break, they have to break it for you.

At around 6am I was around 7 cm dilated (in “active labor”) and my water still had not broken!  The doctor waited until I got to around 9 cm & then broke it for me. I didn’t really feel this at all because I already had my epidural– thank goodness! but I’ve heard it hurts if you don’t have one.
After she broke it, she removed all the sheets she had under me. I really don’t want to know what those must of looked like. Gross!

When I started pushing.

Again, the epidural made the whole thing painless. I could feel when I was pushing, but it didn’t hurt. It honestly just felt like when you’re trying to go to the bathroom but are constipated (sorry TMI!). It is an extremely frustrating feeling. It seemed like I was making ZERO progress until finally, out came baby! It happened in an instant. It was a couple hours of no change and then finally baby’s head came out & bam! The rest was easy! He just popped right out! My cute man was 9 pounds 3.4 ounces and 21 inches long, born July 7th, 2014 at 11:21am! 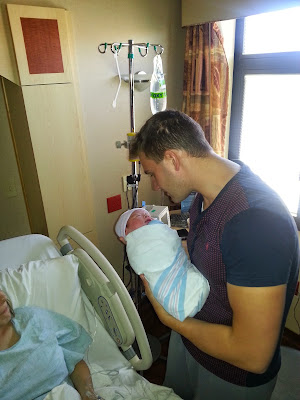 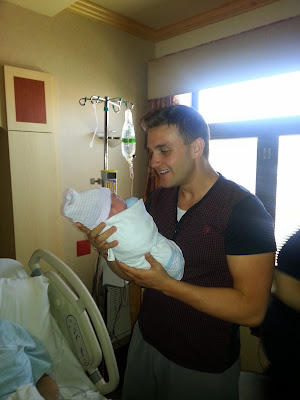 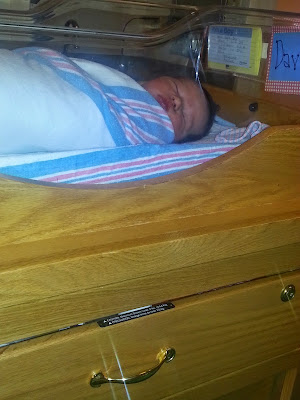 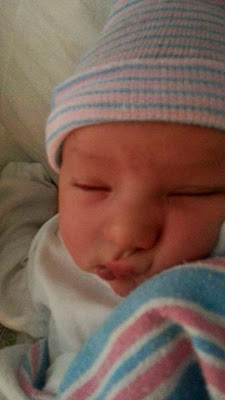 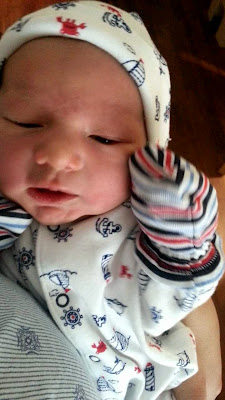