With winter quickly approaching and the idea of having to venture out in 20 degree weather for a gallon of milk becoming much more of a reality, we have been seriously contemplating a move to warmer climate. My husband’s work has an office in Phoenix so this past weekend we took a trip out to Arizona hoping to find a new place to live.

First off, can I just say how great Arizona was for this pregnant woman! My home state is California, but unfortunately that is still just a little out of our price range for the time being. But Arizona has everything I have been missing from California: warm weather, palm trees, jack in the box chicken strips, and Thrifty’s Chocolate Malted Crunch ice cream! I was in HEAVEN for that brief weekend trip!

From where we live now to Phoenix is roughly a 10-10 1/2 hour drive. I had been dreading it for weeks. I even contemplated sending Scott alone so that we wouldn’t need to take our 15 month old on the long car ride. But, Scott insisted we come & so we did and you know what? It wasn’t so bad.

To give you an idea of my little one year old’s personality type: he is not mellow at all. He is very active and gets easily frustrated if we have to stay indoors for too long. Yesterday he kept handing me my purse and saying “go.” And if I don’t look like I’m planning on going anywhere anytime soon, he will grab his diaper bag and go without me! He heads straight to the front door with my car keys and tries desperately to unlock the door. Thank goodness he hasn’t quite figured out locks just yet!

I think we can agree that no toddler, young child, or even adult likes to sit in a car all day, so here are some things we did to make this road trip a successful tear-free one! 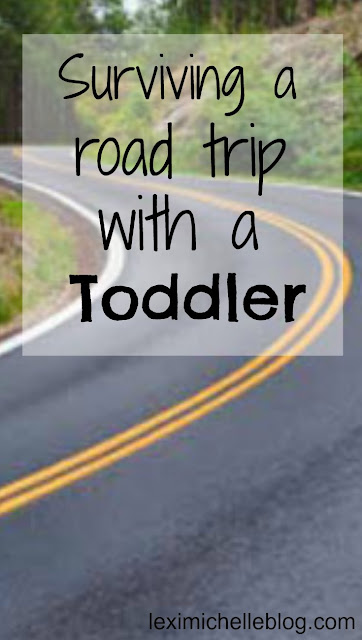 1. Get as much energy out before the trip begins.

3. Fill up either a half hour after kids wake up, or once they start to get restless.

Okay, now it’s 10 hours later, you’ve checked into your hotel and your toddler won’t sleep! Now what?
Good luck! I hope you all have successful, stress-free, safe road trips! Let me know some of your road trip go-tos in the comments below!
Previous Post: « Ways to make your husband’s birthday special!
Next Post: Crockpot Hot Apple Cider-the easy way! »