Christmas is soo close! We are so excited to be starting traditions with our little family. David is only 16 months so he won’t really remember much of what we are doing now, but I still think it’s important for US to get in the habit of these traditions.

One of these traditions is, of course, Santa Claus. There are a lot of people I know who are anti-Santa Claus (including my mother-in-law). Their viewpoint is usually one of two things, (1) it takes away from the true meaning of Christmas and/or (2) they feel like they are telling a lie and prefer honesty.

I disagree. I think it only takes away from the meaning of Christmas if you let it, by having Santa Claus take it’s place, BUT adding Santa Claus in addition does no harm (in my opinion). Also, I don’t feel it is a lie. I think it will teach them to believe in things that seem impossible and even intangible– that concept of faith in things we can’t see is an important & difficult one to understand. I also want my children to stay innocent. It may sound silly, but I think a belief in the tooth fairy, the Easter Bunny, and Santa Claus will keep them from growing up too fast!

Plus, I was never mad at my mom for carrying on this tradition. I never called her a liar. I remember, my mom even used to tell me that if you had the hiccups it meant you were growing! No where have I ever seen proof of that–it was probably a lie.. but I’m not mad, I just look back at it and laugh.

And my last argument in support of Santa Claus is that it is fun. It’s just fun for kids and parents alike.

So here is a list of stocking stuffer ideas that Santa may or may not be choosing from this year for our cute toddler! 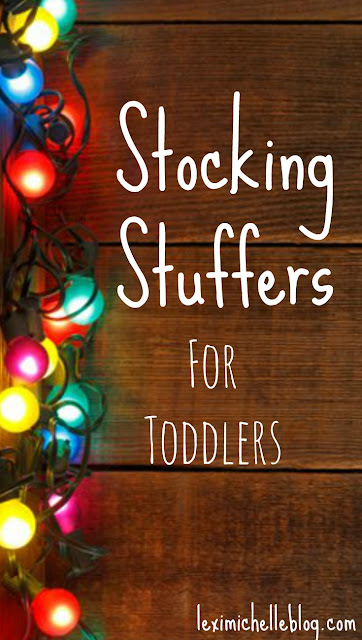