This post was sponsored by Evenflo as part of an Influencer Activation for Influence Central. I received the Evenflo Sibby Travel System to facilitate my review. 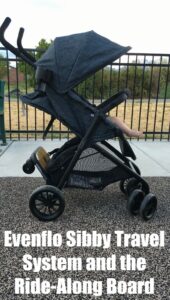 Alright, as many of you know we gained a new member to our little family in April! Farrah is now 4 months old & all smiles!

I love my little Farrah, but I do miss the convenience of traveling with just one child! I can’t tell you how many times people catch me walking with Farrah in her car seat in one arm and my 2 year old in the other! And on top of it all, I may be the only mother who HATES baby wearing! I get all sorts of sweaty from it, especially now that it’s summer time.

It’s actually a bummer too. When I was pregnant I decided not to get a double stroller for multiple reasons: (1) the bulkiness (2) David is now two & loves to run around, only sometimes wanting to be in the stroller, so the extra seat would go empty a majority of the time (3) I planned to babywear during the times he wanted to sit in the stroller (until I realized I hated it!)

I recently had the opportunity to try out the Evenflo Sibby Travel System and the Ride-Along Board (now available at Target) and you have no idea how much easier it makes my daily activities! 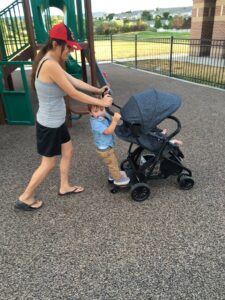 I can avoid the bulkiness of the double stroller that my 2 year old won’t sit in anyway, and I still have the option of toting both children with the Ride-Along Board attachment for David while baby Farrah sits in the main seat. When David is not using the attachment, I can just fold it up very quickly & continue on our walk.


The Travel system also comes with a super light weight car seat that can actually sit in the stroller as well (I love this for if Farrah falls asleep on the drive and I don’t want to wake her).


Honestly, this travel system is pretty straight forward & super easy to assemble I personally didn’t even need the instruction manual. My 2 year old was even able to figure it out on his own!

When I first set it up, I was a little concerned about the space on the ride along board. I wasn’t sure if the back of the stroller seat would bother my son, but honestly he doesn’t seem phased by it & it’s basically like a little skateboard so he loves it! He especially loves it when we are going somewhere uphill. He just jumps on & then jumps off when he’s done. Make sure you teach your toddler to warn you before they jump off, I made that mistake lol

All-in-all super easy to use, glides smoothly, has a large storage basket in the bottom (with front & back access), & it’s pretty versatile, plus my baby girl thinks it’s pretty comfy! And it comes with a car seat! I’m all for deals like this! Don’t forget, this deal is available at Target, so be sure add it to your registry!