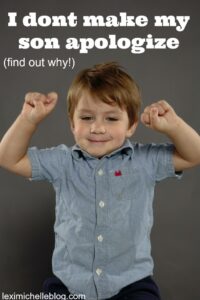 In our culture it is common practice to over-apologize. I have done it my whole life. Oh, we reached for the same thing at the grocery store “oh, sorry.” Did we almost bump into each other? “sorry again.”

Honestly, I never really thought this was strange until someone pointed it out to me at work almost 5 years ago. He was from Mexico so it’s possible it’s not common to say this for everything over there? He told me a story about something trivial, like bad traffic and I responded with an “I’m sorry. That sucks.” Apparently this was the last straw because he said “You’re sorry? Why are you always saying you’re sorry?” I didn’t know what to say. It’s just a habit I guess?

I now try my best to come up with better responses rather than apologizing, because it’s really not my fault.

Now when it comes to my two year old, I think it is important for him to understand how to apologize and admit when he is wrong. I do my best to model that behavior. But I learned something very quickly when I tried to make him apologize for an accident–he wouldn’t do it! He clearly felt bad that his sister was crying when he wasn’t intentionally trying to make her upset, but he refused to apologize. Instead he just sat there silent and in shock. This is when I decided to stop making him apologize.

What I do instead:

Alright, so what do I do when he does something accidentally that hurts someone? I give him a hug.

For example, yesterday he was walking and tripped, knocking his sister over. She immediately started crying and he stood there, silent, unsure of what to do, clearly feeling bad, and wondering if he’d get in trouble. Instead, I immediately ran to comfort Farrah & held my arm out signaling for David to come over. I gave them both hugs. I asked David if he was okay, and told him to try and be more careful next time. He hugged me back, smiled, and handed the baby her binky.

Accidents happen. I’m not saying this is what everyone should do, but this is what works for us in our home.
Previous Post: « Potty Training Essentials
Next Post: How to save money with Groupon! »