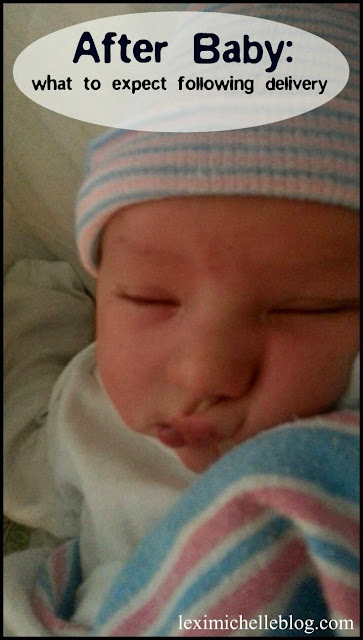 In this post I will share all of my personal experiences immediately following the birth of my cute son. This is NOT a post about taking care of a newborn, this is about the bleeding, the stitches, and what it all feels like afterward, so if you want to know what the recovery process is like please keep reading! I hope you find this information useful! Also, if you want my story of how the labor went, check it out here.

Okay. So after David was born…

They took him over to a station in my room & weighed him, cleaned him, etc. My husband was hovering over them and I was in the process of receiving a few stitches (I had a minor tear from delivery). I didn’t feel the stitches much at all. There was a little tugging feeling, but no pain thanks to the epidural.
My son had swallowed some meconium while in the womb so they took him to another room to monitor his breathing. My husband followed him & I was left alone.
The nurses emptied & removed my catheter. They then wheeled me to recovery. I was still numb from the waist down and so I stayed in my bed for the next couple hours.

The first time I went to the restroom after delivery I needed to have a nurse present, not because I felt I needed one, but because they were still monitoring me to make sure my recovery went smoothly. I actually couldn’t pee with a nurse watching me so she told me that after I went not to flush & she would come back to check it (super gross, I know!). Before she left she showed me how to use the hospital mesh underwear & giant pads. It went: mesh underwear, giant diaper pad, giant normal pad, and then 3 tucks medicated cooling pads on top. She also gave me a squirt bottle to use instead of wiping. I used the squirt bottle for the first 2-3 weeks, but accompanied it with patting dry after the first week. (click here to see my must haves for postpartum recovery!)

Getting in & out of bed was the worst.

I felt severely bruised. Along with that pain, I felt a gush of blood every time I attempted standing for the first couple days. I literally dreaded going to the bathroom for that reason. Laying in the hospital bed was easy though, virtually no pain (as long as I was staying still). My husband helped me with feedings and diaper changes so that I wouldn’t have to get out of bed, which was great.
For anyone wondering, the bruised feeling got progressively better but hurt for the first 2 weeks.

The worst part about nurse visits.

The nurses were great. While I was in the hospital, nurses would come in and check on me and baby every couple hours. But one extremely annoying thing they would do is that they would come in and push on my belly! Whenever they did this I would feel a gush of blood come out! It was the worst!

As far as weight loss goes… my son weighed 9 pounds 3 ounces at birth. I weighed myself the next day & only lost 8 pounds! How is that possible?? I give birth to a 9 pound baby, delivered the placenta, & I’m sure a ton of other fluids came out too & I didn’t lose at least the amount my baby weighed??!
I really want to stress this point because some new moms might be depressed when their baby is born and their stomach isn’t magically flat. I did lose about 20 pounds in the following weeks, but I was still shocked at what the scale said initially.

This might sound silly, but I was paranoid about bleeding everywhere, so for the first little while I would put these “assurance” brand pad things wherever I sat. They looked like those little dog pee pads you use when you’re potty training your puppy, but they’re for humans and they sell them at Walmart near the adult diapers. I never leaked, but again, I was a little paranoid..

I was really scared for this. I took stool softeners daily to prepare for this moment, but as it turns out, it really wasn’t that bad. It felt normal and didn’t hurt. Now I only had a minor tear, so I can’t speak for everyone, but don’t stress, everything will be fine.

The first week is the hardest, then it’s not so bad.

After the first few days the bleeding lessened a ton to the point where I didn’t even need a big pad anymore, I just used liners. So I don’t know that I would stock up on giant pads as much as I would on liners. That heavy bleeding lasted maybe 5 days & 3 of those are spent in the hospital where they give you pads. The light bleeding, though, lasted 6 weeks for me. It was the most annoying thing because there would literally be days here & there where I wouldn’t bleed & I thought it was over and then it would start up again. I was 7 weeks postpartum when it all finally stopped.

You’re going to feel like you can do more than you probably should.

By the end of the first week I felt so much better. We even were able to go out to the mountains for a camp out when baby was 5 days old! This was not an overnight camp out, we just cooked outside for several hours, then came back home. I honestly had to remind myself I just had a baby in order to keep myself from doing too much.

Breastfeeding was difficult for me and maybe I gave up a little too early, but I opted for the breast pump. My baby was still getting the good milk so I figured the method it was extracted didn’t really matter..
My insurance got me a free Medela breast pump which was nice, but they don’t ship it out until either you deliver or your due date comes (whichever is first). Since I was having a hard time breastfeeding the normal way & my pump hadn’t arrived yet, I went to Walmart and purchased a cheap Avent manual breast pump. This was the BEST relief ever! Especially since your breast become engorged with milk a couple days after giving birth and it hurts! Pumping didn’t hurt though, so don’t worry =)

I had a lump in my breast shortly after David was born. I kept massaging it and it went away. According to my OB it was due to clogged duct because the milk was not draining well on that side.
What a relief! I was definitely freaked out at first, but it is fairly common so don’t panic, but definitely check with your OB because you never know..

Anyway, to sum it all up: the postpartum period wasn’t too bad, I felt pretty bruised for a few weeks. I was prescribed Ibuprofen by my doctor, so occasionally I would take that to help with the soreness and I also took a stool softener every day.
Good luck to all you future mamas out there! It really isn’t that bad! 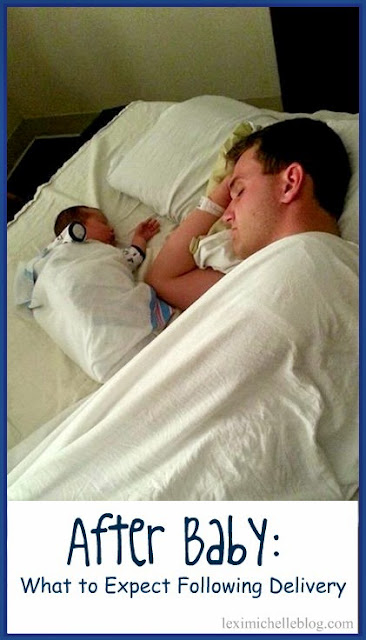